Plight of a Common Man: Decoding the rising petrol prices in India 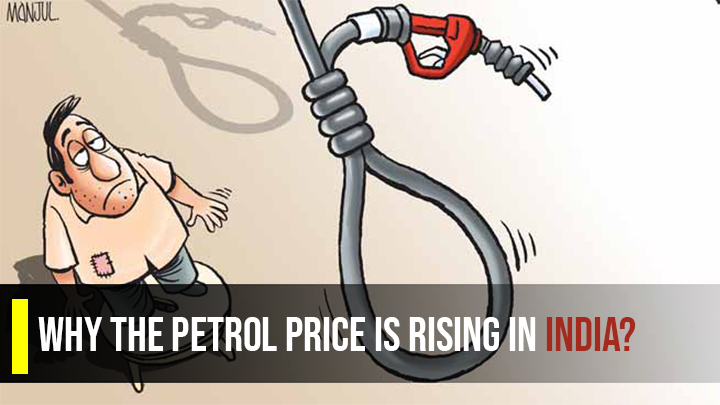 Plight of a common man: Decoding the rising petrol prices in India

The hike in petrol and diesel prices has been a topic of longstanding debates and arguments for a long time now. With people on one side cringing about the high taxes and the government on the other side trying to elucidate its actions, the discussion is a never-ending game.

As the prices of petrol and diesel shot up again, people are finding it difficult to cope. This is because due to the pandemic and the fact that people are still in the process of mending their financial stability.

So, this time the entire matter of petrol price hike has fabricated into a massive concern for a common man!

But, why are the petrol prices rising in India?

What is the reason for the petrol price hike in India?

Is this a standalone event? Will the fuel prices reduce again in future?

What are the latest updates with regard to the petrol hike in India?

To know the answers to all these queries, please continue reading.

An article published in Financial Express reported that on February 16, 2021, "The retail petrol price in Delhi touched an all-time high of Rs 82.29/litre, rising by Rs. 4.69/litre since the same day a month ago".

Why did this happen?

Let’s understand the various components that get added to the final price of fuel.

Before the petrol and diesel reach the end-user, it goes through certain stages. At every stage, there is some addition to the price of crude oil. So, what reaches the users as fuel actually passes through different processes like refinery, central taxation, VAT, etc.

In order to understand the entire process, you can have a look at the following image where the breakdown of the cost of 1-litre petrol and diesel has been depicted.

Therefore, by looking at the price breakdown above you can easily establish the proportional relation. Whether the price of crude oil rises in the international market or the government increases taxes on petrol, in the end, the price of petrol or diesel gets affected significantly.

If you want to know more about the historic fall in the price of crude oil, take a look at our blog on the fall in crude oil prices.

When the crude oil price dropped, in March 2020, the Indian government imposed higher excise duty on petrol and diesel. The special additional excise duty (also called a surcharge) on auto fuels was raised by Rs 2 per litre and the road cess was increased by Rs 1 per litre. Along with this, in order to ramp up the state-level revenue, several India states went on to increase the duties charged as well.

Owing to these surcharges and additional cess introduced by the government last year, it is expected to earn a total of Rs 1.87 lakh crores in FY21.

Although the collective demand for petrol and diesel has reduced, there will be no impact on the government’s revenue from the taxes (on diesel and petrol). On the contrary, the estimates reveal that this revenue can rise by 82% in FY21.

Thus, the government seems to be in a merry position!

Quite a neat parlour trick, is it not?

Factors affecting the price of petrol

There are always two sides to any coin.

In the former part, you saw how crude oil reaches the end-user as fuel after passing through several stages.

But, what about the different events that combine together to determine the price of petrol?

In this section, we will be exploring the factor that affects the price of petrol.

Let us dive right in!

1) The rate of crude oil in the international market:

Any change in demand, political unrest, production, etc. affects the price of crude oil. If crude oil prices change, even marginally, the impact is felt on all domestic markets of all the nations.

2) When supply and demand are not in equilibrium:

To have a balance in the economy, supply must be equal to demand. The Indian oil refineries often find it difficult to meet the demands of the masses because of the high import cost of crude oil. Thus, demand and supply are generally not balanced, affecting the petrol price.

Secondly, the refining companies which we have in India prefer to stack up and maintain the crude oil inventory for up to 6-7 weeks. The process of stacking up also influences the rate of petrol.

Well, taxation is again a very common factor that contributes a lot towards the final pricing of petrol and diesel. Apart from the central government, the local or state government also charge taxes and the state-level taxes are not homogenous in the entire country. Whenever the government decides to fine-tune the taxes on fuel, naturally the petrol price is affected.

4) Rupee to the Dollar exchange rate:

The impact usually does not get highlighted very much but the rupee-dollar exchange rate is one of the prime factors influencing the price of petrol.

When the Indian oil firms import the crude oil they need to pay the charges (crude oil + freight) in dollar. On the other hand, when they sell the processed form of crude oil here in India, they get paid in rupees!

Now if the price of crude oil falls, due to the weaker value of the rupee against the dollar, the gains of the oil refiners reduce. The opposite happens when the crude oil price increases.

These were some major factors responsible for any kind of price movement of petrol and diesel.

So the next time you come across news articles on the exchange rate changes or changes in the crude oil supply in the international markets, beware that a rise in fuel prices may soon follow.

Now that we have discussed the basics of what influences the price of crude oil, let us get into the details.

Why are fuel prices rising in India?

Before we get start decoding the reasons for the constant price hike in petrol, take a look at the following graph.

So, from the above graph, it is clear that India is not new to the constant petrol price hike and it has been regularly increasing for several years now!

But, since last year, this roller coaster ride of the petrol price has mainly seen the ups and lesser downs.

For starters, after the crude oil price dipped to $14 per barrel towards the end of March 2020, it has followed the upward trajectory since May 2020. Apart from that, ever since the global economy started unlocking, the demand for crude oil has begun to rise. This pushed the crude oil prices even more!

Since we import around 80% of the crude oil from the international market, we have to pay more for importing it. As I mentioned in the former part that this directly impacts the fuel prices in India.

On the other hand, the central government went on to make several revisions in the fuel prices in the past year. You will be surprised to know that it made changes around 67 times in the fuel prices between April 1 and December 10, 2020. Initially, you must have read that the taxes on fuel were also increased in March last year both at central and state levels that also explains the soaring costs.

The government is trying to compensate for the loss in revenue that it had to bear due to the lockdown last year. But, the effect of the petrol price hike on the common man is substantial.

The fear and concern of people over the price hike on fuel seems to not be ending anytime soon. The government needs to find some long-term mechanisms to enable the price cut and give relief to the citizens!

Until then, there is no end in size for the petrol hike in India.

If you liked reading this article, please do share it with your friends and family so that they, too, can learn about the reasons behind the consistent rise in the price of petrol.