Your money is bleeding in current
account with 0% interest

The Rise & Fall of Yahoo 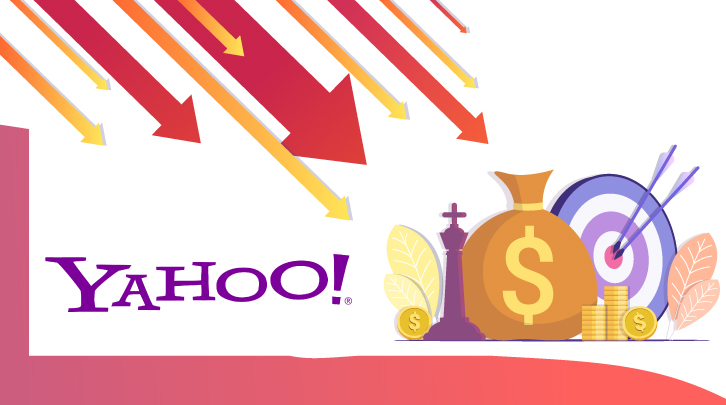 What, according to you guys, is the best time period? I don’t mean to be arrogant enough to negate the brilliance of the past which has given us minds like Albert Einstein, William Shakespeare or Rabindranath Tagore. Of course they are geniuses. The time frame does not even matter for gods like them. Being a millennial kid myself, though, I am partial to Generation Z.

For those of you who are not familiar with this nomenclature, people who are born in the year range 1981 to 2001 are called millennial. Hard though it is for me to admit, the people are not even the best part of these decades. This time period saw a boom in technology and scientific advancement that has shaped the world into what it is today.

Yahoo was one of the first major tech companies that was a millennial product.  Most of our first email addresses were with Yahoo. However, somehow, Yahoo faded away into the distance and from all our memories.

Such an important company does not deserve such an ignoble end. That is where I come in.

I am going to dedicate this article to the tech mammoth that was Yahoo and chronicle its movements through the last couple of decades and our lives.

In the evergreen words of Julie Andrews, “Let’s start at the very beginning.”

Yahoo was founded in 1994 by David Filo and Jerry Yang. They were electrical engineering students at Stanford University and they created a website called “David and Jerry’s guide to the World Wide Web”. It was originally formed with the intention of being a directory for the internet.

Funny, isn’t it? Just a couple of graduate students having fun.

Well, “David and Jerry’s guide to the World Wide Web” was renamed Yahoo in March 1994. With that, these two youngsters launched one of the biggest tech startups the world has ever seen.

Yahoo grew by leaps and bounds in the 1990s. Keeping in mind that the World Wide Web was still somewhat new and untraversed territory, Yahoo quickly became the most popular search engine. Filo and Yang levelled up when the company’s initial public offering was valued at almost $900 million in 1996.

Now this all seems like a bit of fairy tale, doesn’t it?

That, my dear friends, is where the true brilliance lies. It may seem as though Filo and Yang were blessed with rosy beginners’ luck, but I assure you, that was not the case.

In the pre-Google universe, Yahoo quickly beat its competitors, Alta Vista and Excite and emerged as the premier search engine by investing a considerable amount of money and effort into developing its web portal.

Yahoo is a prime example of what being in the right place at the right time can do for you. The company stock price rose by almost 600% in the next couple of years. Riding the Tech Bubble, Yahoo kept growing and growing until it reached gargantuan proportions. By 1998, it was valued at about $40 billion.

This startup took the world by a storm. With its search engine and free email service, Yahoo quickly became one of the leaders in technology.

However, all good things must come to an end eventually.

In 1998, Google was launched. At that time, nobody could have predicted how big Google would become. In retrospect however, it is possible to say that Yahoo’s days were numbered from then on.

Yahoo’s journey is much like a wave. Since its inception in 1994, the company showed a steep upward climb. It reached its peak in 2000 when the company valuation reached $125 billion. After that, however, came the dot-com crash as the tech bubble burst and prices plummeted.

Now, we can argue that Yahoo did fare better than some of its contemporaries and competitors, many of whom were eviscerated in the dot-com crash.

Yes, Yahoo survived. “Survived” however, is the key word here. “Survived” and not “flourished”. A seemingly minor distinction, but an important one at that.

In the years since then, Yahoo somehow managed to find its balance again, but the zeal and brilliance of the past were glaringly absent. Hard times hit the company as they tried a series of acquisitions like Alibaba and Flickr. It is safe to say that financially, the company had seen better days.

In 2008, Microsoft offered to buy out the company for a whooping sum of $44.6 billion. However, Yahoo turned down the offer. In retrospect, this was not the smartest move, but perhaps the then-CEO, Yang, had probably felt a surge of confidence in the company.

It all goes downhill from here, guys. If it gets too painful to witness, feel free to look away.

After a few years of disappointing financial performance and a succession of CEOs, former Google employee Marissa Mayer was hired as the CEO in 2012. This desperate attempt to obtain a lifeline did not pay off for Yahoo and the company was finally acquired by Verizon in 2016 for a shockingly low sum of $4.8 billion.

This story is not one of glory or happiness which ends with the protagonist riding off into the sunset to live happily ever after. This is a sad tale of a once huge company, brought down to a mere shadow of its former self.

Sad though it may be, it is interesting to know the reasons behind the downfall of Yahoo. Was it because the company did not have a strong base? Was it just beginners’ luck that Filo and Yang had? Or can the downfall be owed to bad managerial decisions?

What brings a company down?

The downfall of a company is very rarely caused by any single person or any single action. More often, it is the cumulative effect of a series of bad decisions.

The first bad decision was confusing being at the right place at the right time with being smart. Yahoo was launched at a time when the World Wide Web was a relatively new invention. They were the most popular web portal for a brief period and generated a steadily increasing stream of revenue through advertisements. They got complacent, however, and stopped focusing on a strong engineering base which should be the backbone of any tech company.

The second bad decision was letting opportunities of acquiring companies like Facebook and Google just pass by because of minor technicalities. What makes a company is being able to look into the future and being able to judge which deals would benefit the company and which deals would bring losses. When I say look into the future, I don’t expect the CEO to sit down with a crystal ball and gaze into its depths for answers from the mystical realm. However it is important to have intuition when it comes to business.

In 1998, Larry Page and Sergei Brin offered to sell Google for a mere sum of $1 million.

Can you even imagine where Yahoo would be today if it had managed to acquire either Google or Facebook?

Sadly, it was not meant to be.

Also, Yahoo made the mistake of acquiring companies like Flickr, and then not developing it properly. In the age of social media, Flickr could have morphed into the next Instagram. Instead, it languished away into oblivion.

Other acquisitions that can be written off as losses include Broadcast and Tumblr.

The third bad decision is the major one, guys. This is the biggie.

Amidst all the myriad acquisitions and stream of bad business decisions, Yahoo forgot where it came from. Instead of developing the core products properly, the company focused instead on fast revenue growth through advertisements.

When I was in young kid in school, my mother would make me practice math every day until I was no longer scared of the subject and instead started liking it. This was probably Stockholm Syndrome, of course, but let’s not get into that.

Yahoo faced a similar situation when they were still a fledgling company. Instead of building a strong engineering base that could weather any storm the business faced, it skipped over that part and started acquiring other companies. Instead of focusing on the improvement of their own core products, Yahoo thought it would be easier to buy other companies and run them.

When we break it down to the basics, it all seems rather juvenile, doesn’t it?

It is not always this simple, though. This is a watered down and abridged version of the original saga.

Even after chronicling the twenty year rollercoaster that is the life of Yahoo, it is impossible to deny the genius of Filo and Yang. They truly created a masterpiece. They were just unable to run it properly. A combination of bad managerial decisions and missed opportunities have made Yahoo what it is today; nonexistent.

Let this story leave with you a few important morals; to never forget where you come from, and to never bite off more than you can chew. Keep these in mind along with the story, and who knows? You could be the next Filo and Yang.