Your money is bleeding in current
account with 0% interest 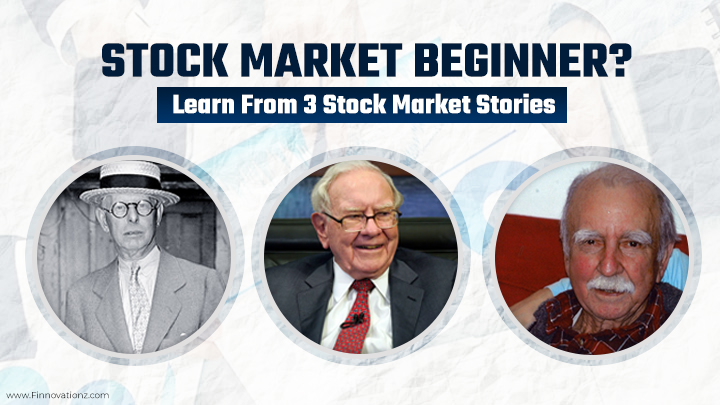 In the words of Eleanor Roosevelt, ‘Learn from the mistakes of others. You cannot live long to make them all.’

There is no sure short formula to become successful in the stock market. All you can trust to do is first learn and then apply the same while making your investments.

There are a number of ways to learn the nuances of the stock market as a beginner and one of the practical ways is to learn from the stories of people who have been here already.

Here are 3 famous stock market stories that can help you in your stock market journey especially if you are a beginner. Let us dig in right away.

The Story Of Jesse Livermore: A Legend In Trading

Turning the wheel of time there lived a man named Jesse Livermore from the United States who had a bright and shiny time in the stock market from 1900-1930. He was not only an investor but had interests in trading as well and through both these channels, he made loads of money from the market. But, then came the year 1929 and brought something unprecedented. Yes! With 1929 came The Great Depression that led to a sharp fall in the stock market.

In a span of three years, the S&P 500 posted a decline of 83.4% and the loss faced by traders was so high that many of them sadly did suicide. Where on one hand the market and traders were falling apart, Jesse Livermore was writing a completely different story. He took short positions in a market that led him to post good profit while the market was falling.

For those who are not aware- Short selling is a method in which a trader borrows shares from an owner and sells it at market price with the hope that the stock price will fall. When the prices drop, the trader buys the shares back and ultimately incurs a profit.

Well, Jesse Livermore was wise enough to predict way before that the market would fall hence he took short positions. Due to this investment plan, he went on to earn a profit that would be valued at 20,000 crores in today’s time.

On one hand, not only the market was falling in the US, poverty started to surface among a significant part of the population but on the other hand, Jesse Livermore went on to become one of the richest people in the world.

When this happened his behaviour took a turn and his greed paired with overconfidence led him to invest money that was out of his capability.

Not only this his expenditure became rash and investment decisions were often unplanned. It was 1932 during which his trades and rash investment decisions started to show results. He made a number of wrong bets in the market and he started to incur more loss instead of profit. Sadly his greed had no limit hence he started taking loans in order to trade. Soon this imbalance of his financial planning became the reason for bankruptcy and at last, in 1940 he ended his own life.

Jesse Livermore became very rich at a point of time but it was mismanagement of wealth that led to his downfall. The speed with which he earned all that wealth, with the same speed he had lost all of it.

A simple man with very little education had a net worth of 8 million dollars which amounts to nearly 55 crores when he passed away. You would be surprised to know that he worked at a gas station for a total of 25 years and another 17 years he spent by doing the work of floor cleaning. Then how did he have so much wealth?

Read Ahead to find out the reason and more about Ronald Read, an American idol!

The simple way by which Ronald James Read could incur all the wealth during his lifetime was through- Discipline and Investment. With his normal job and salary, he started to allocate some amount towards savings with discipline. Now, he used to invest all his savings in blue-chip stocks with proper management. For those who are unaware, Blue Chip stocks are the stocks of big companies with good market capitalization.

If we outline the difference between Jesse Livermore and Ronald Reed then the most basic point would be the financial management factor. Where on one hand, Ronald James Reed not only knew how to earn money but he was also aware of managing all that wealth than on the other hand, Jesse Livermore although earned way more than Ronald Read but he could not manage all that wealth he created.

Thus, everything boils down to how well you maintain your finances.

Everyone can earn but not all can manage it well. This tells us that a successful investment can be done by anyone! It does not matter what your job profile is or you do not necessarily need to earn loads of money to invest!

Heath and Investment are those 2 things you must know to manage properly as mismanagement in these two areas can cost you a lot. The key to maintain both these is patience and discipline.

As per the statistics of October 2020, ace investor Warren Buffett’s net worth stands at 80 billion dollars. One of the most striking facts about Warren Buffett is that he started to invest when he was only 11 years old! By the age of 30, he was already a millionaire.

All this he could achieve was due to his investment skills. He made a very strong financial base when he was young and where other people start to invest at the age of 30-40 years, it is his early investments that have helped him to make a good grip over his finances. Over the years, his discipline in stock market investment helped him to take advantage of compounding. Going by stats, the compounded yearly return earned by Warren Buffett since he started proper investment is around 18%.

Warren Buffett has been investing for more than 70 years now and what makes him special among other investors is his consistency and patience that he has kept intact all these years.

People who are in this field of investment must be well aware of the friendship and renowned partnership of Warren Buffett and Charlie Munger. Not many know that they had a third partner named Rick Guerin who used to make investment decisions together but now he is not their partner any more.

As time passed Rick Guerin wished to make money but in a short span of time. This is why he turned to trade and started to invest in the derivatives market. His greed of becoming rich very quickly created problems for him. Once upon a time, while Rick was trading in derivatives he incurred a huge loss. This loss was so big that he finally had to sell his stake in Berkshire Hathaway so as to cover all his losses.

So, this story simply dictates that greed would not take us anywhere. In the long run, it is consistency and patience that can help us to not only manage our finances well but to create wealth as well.

These were the three stories from the stock market that every investor must know and must try to implement the teaching they give. Learn and Keep Investing!

Get Paid Stock Market Courses at FREE of cost. Click here to subscribe to 14 Days' Free Trial on all our courses.