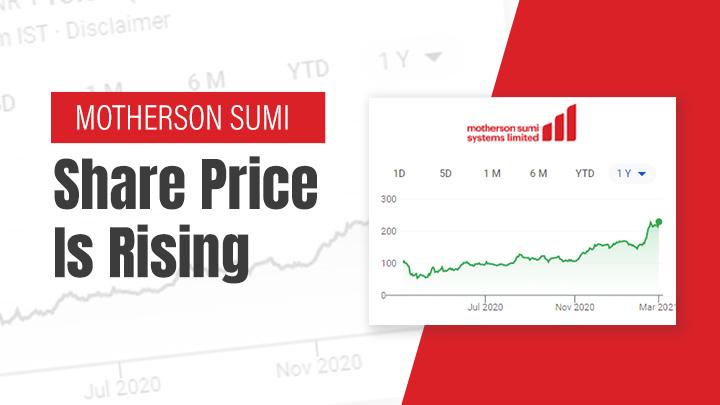 Around the third week of February 2021, the shares of Motherson Sumi Systems roared to a fresh 52-week high.

As the share price reached around Rs 221, the hush-hush flourished in the stock market. From investors speculating whether to buy or sell it to analysts predicting its future performance! In fact, analysts like Morgan Stanley, CLSA, Goldman Sachs, etc went on to raise the company’s target price as well as the earnings projections.

The intriguing part is the reason behind this rally. Why is the share price of Mostherson Sumi rising?

If you wish to find out the possible rationale behind it, get started with the reading!

What does Motherson Sumi System Limited do?

The company, Motherson Sumi Systems Limited (abbreviated as MSSL) is one of the forefront players of the automotive component manufacturing industry. Incorporated in the year 1986, the firm began its journey initially as a joint venture between Sumitomo Wiring Systems (based in Japan) and Samvardhana Motherson Group. The prime objective of this joint venture was to manufacture the integrated wiring harness with metal and plastic parts.

The company is headquartered in the city of Noida and in 35 years it has successfully acquired around 18 companies (from the same industry) present in different parts of the world.

At present, Motherson Sumi has become the flag-bearer of the Motherson Group. The company started its stock market journey after getting listed in 1993. Over the years it has become one of the top specialized players in the automotive industry by catering to a variety of customers. It marks its presence on the global stage and continues to prosper.

If we talk about its product portfolio then the list is diverse. What started as a wiring harness manufacturer, today deals in products like rearview mirrors, bumpers, cockpit, interior trim, etc.

Due to all the work it company does, Motherson Sumi

The strength, performance and future growth of any company can be estimated through its financials. So, let us see some highlights from the annual report of 2019-20 of the Motherson Sumi company.

During the release of its annual report of 2019-20, the company made it clear that it has prepared itself to fight any kind of inevitable storm and it continues to respond as well as adjust well during the pandemic.

Most of the business newspapers have been reporting about the surge of 53% in the share price of Motherson Sumi during the first 15-18 days of February. As a matter of fact, the share went on to post a 52-week high around the same time.

Reasons Behind The Sudden Surge

The question is what is the rationale behind this sudden spike?

Well, the simple answer to this query is the top-notch financials reported by the company for the third quarter of FY21.

The share price mainly roared after the financial results of the third quarter of the current fiscal year were declared.

The key points form the financials (from Q3FY21)  that attracted the investors towards the company are:

After the quarterly results were announced the top management spoke in length about the efforts put by its global team despite the unprecedented difficult times that we all had to face in 2020.

After revealing its quarterly financials the company has also outlined its plans for the future keeping the next five years in focus.

The group has set a target of revenue worth $36 billions by FY25 and around 25% of the revenue is expected to come from its non-automotive business. This implies that the company is planning to expand its bandwidth in the other segment apart from the automotive space.

The group is willing to make a good bet on its capital as it has kept a target of 40% RoCE. Along with that, it aims to achieve a dividend payout of 40%. As a part of restructuring the company, the stake of Sumitomo is likely to reduce after which MSSL will be carrying out other mergers and acquisitions that would favour it in the long run.

These targets are part of its Vision 2025 mission and if the company continues to work towards its target then investors who hold the shares of Motherson Sumi can expect good returns in the future.

But, do not forget to continually track the financials through fundamental analysis on a regular basis.

The investors who are confused about whether Motherson Sumi is a good stock to buy, the company’s future growth looks good.

MSSL plans to search for inorganic opportunities of growth due to the ongoing COVID-19 pandemic. The company is also positive about sustaining its profitability in the coming future. The management of MSSL is also hoping for demands to increase in the next quarter which will directly benefit its financial performance.