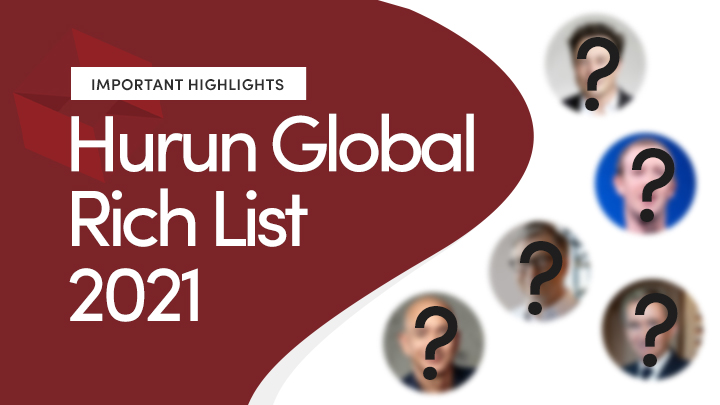 On March 2nd, 2021, the tenth edition of Hurun Global Rich List was revealed to the world. Surprisingly, even the pandemic could not stop the riches of the world from adding a handsome amount of money into their pockets!

According to the Hurun Report 2021, there have been some interesting revelations made with regards to wealthy people around the world. To know the major highlights from the Hurun List, you can hop on and read the article.

Top 3 Richest Men in the World

The toppers of the Hurun report 2021 come with no shock. People already had an idea about the ongoing cold war between Elon Musk and Jeff Bezos to claim the position of the richest man in the world.

Well, the final round was won by Tesla’s Elon Musk.

The master of crazy ideas and farsightedness, Elon Musk has succeeded in claiming the topmost position among the 3,228 billionaires of the world. As the richest person he went on to add a total of $151 billion to his existing wealth and now Elon Musk’s net worth stands as $197 billion. The most interesting fact is that he has topped Hurun’s Rich List for the first time.

Not falling far behind his competitor, Jeff Bezos, the founder of Amazon Inc has secured the second position. Although he claimed the first position in the rich last year, in 2021 the story changes a little. Jeff Bezos ended up adding $49 billion to his wealth from last year and his total net worth now stands at $189 billion.

The third position in the Hurun Global Rich List has been taken by the ‘Luxury King’, Bernard Arnault. For those who are unaware, he is the CEO and chairman of LVMH Moet Hennessy - Louis Vuitton. Louis Vuitton is known for selling top luxury products in the world. After taking the third position, Bernard Arnault’s net worth now stands at $114 billion.

Also, India is now home to a total of 209 billionaires but only 177 of them live in the country The list of top 3 billionaires in India is as follows:

With a net worth of $83 billion, the owner of Reliance Industries Limited, Mukesh Ambani is the richest man in India. Surprisingly, Mukesh Ambani and his company thrived in the middle of the pandemic as well as went on to raise a spree of funds from top global investors. It remained a hot topic in 2020!

In 2020 Gautam Adani made it to the headlines quite often owing to the surges in the share price of Adani green after the market started to correct itself. He became a self-made millionaire at a very young age and according to the freshly released Hurun report, he is the second richest man in India. He secured a global rank of forty-eighth with a total net worth of $32 billion.

The founder of HCL technologies has become the third richest person in India and he secured fifty-eight rank globally. Shiv Nadar founded HCL during the 1970s and since then he has totally changed the game of India’s IT sector. His total net worth currently stands at $19 billion.

As mentioned in the former part, the world now has 3,228 billionaires and in a span of one year, a total of 412 fresh billionaires got added to the list. In the following part, I have outlined some key takeaways from this year's Hurun Global Rich List. So, continue with the reading.

New Entries To The Top 100 Billionaires

So, this was an overview of the Hurun Global Rich List of 2021. Hope you readers got some useful information from the article. Keep following FinnovationZ for more interesting content from the world of finance.