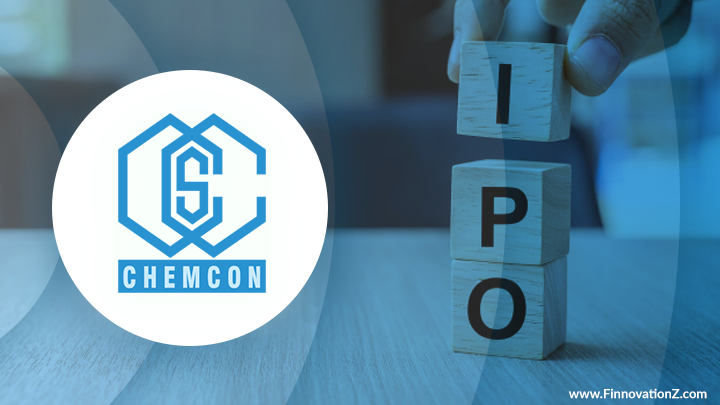 With new IPOs coming along the way, here we have another one coming up, which is of a Pharmaceutical company Chemcon Speciality chemicals private Ltd. This company is located in Manjusar, Gujarat. And it deals in manufacturing major antibiotics which are used in the making of drug-like Hepatitis and HIV.

Chemcon price band Rs 338 to Rs. 340 You will get 44 shares in this IPO’s lot. This means this company’s one lot price is around 15 thousand rupees. Shares will be allotted on the 28th Sept, and shares will be listed in the Stock Exchange on the 1st October. In this entire issue, 35% of shares will be reserved for Retail Investors.

Chemcon Speciality Chemicals was started in 1988. The company was earlier known as Gujarat Quinone. In the year 2004, the company was merged with Chemcon Engineers, and it was then called Chemcon Speciality chemicals. Chemcon is a B2B chemical company, which means their clients are not individuals. Their clients are different businesses. The company mainly functions in 2 segments. First is Pharmaceuticals and second is Oil well completion chemicals.

This company makes HMDS ( Hexamethyldisilazane) and CMIC ( Chloromethyl Isopropyl Carbonate). In Pharmaceutical chemicals, their main two products are HMDS and CMIC.In the Financial year 2020, Company’s 57.4% revenue came from the pharma segment. i.e it came from HMDS and CMIC.

Company’s 43.8 % revenue comes from HMDS. HMDS is used in making antibiotics. HMDS most market share is with china and they have a 42% market share of HMDS, and India has 6.76%. HMDS market share is mainly because of Chemcon because chemcon is the only company in India which makes HMDS. India needs HMDS to make its antibiotics and anti-stress formulations, and this is usually possible with the help of import.

Whatever amount of HDMS that is used in India, it comes from China, but the percentage of import is gradually declining. In the year 2013, India used to import 65% of its total requirement. This figure came down to 60% by the year 2018. The only company which benefitted from this dropped percentage is Chemcon because currently, Chemcon is the only company which is making HDMS for India.

Although there are other companies also which are entering HDMS, they can also benefit from these sales. The other important thing here is the chemicals that Pharmaceutical companies need, china is the leading country in terms of those, and most of these chemicals are made in china only. These companies are also adding to the rising pollution levels in China. This is the reason why china bought some serious regulations to curb the pollution level. And this has directly hit the manufacturing capacity of these companies. Indian companies can advantage from this.

CMIC is used in Tenofovir which is an anti-aid and anti-hepatitis drug. Tenofovir is a U.S approved drug. This is used in the treatment of HIV and Hepatitis. Chemcon is a leading player in the CMIC Industry. There are only two countries in the world which make CMIC. That is India and China. In CMIC, 55% market share belongs to china, and the rest 45% is of India.

If we talk about the use of CMIC, then it is demanded in India, most of the CMIC, India exports from china. The demand for Tenofovir is continuously rising, and this is why the demand for CMIC is also rising. And due to this chemcon is making profits. Because Chemcon is the biggest producer company in India.

This company makes calcium bromide, zinc bromide and sodium bromide which is used in the exploration process of oil and gas. These compounds are used in filtering out the oil and gas. In the FY2020, the company got 35% of its revenue from this segment. In India, the main manufacturer of Zinc Bromide and calcium bromide is Chemcon. Oil Well completion chemicals is a huge segment where India has a market share of 2.67%. The company exports these products to the U.S, Japan, Russia .U.A.E, China and Russia. The company has got 35% revenue from exports. This tells us that this company is a leading export company.

The clients of Chemcon like Aurbindo, lauras Labs and Macleods have been working with Chemcon for quite long now. The company has built a long term relationship with all its clients. The company’s manufacturing facility is in Gujarat’s Vadodra. Currently, the company has 5 manufacturing plants, out of which two of them manufacture CMIC, rest two manufacture Oil well completion chemicals and the remaining one manufactures HDMS and other products.

The biggest opportunity in front of this company is to build more plants, and the company is planning to build new plants from the money they will earn from the IPO. The company competes with Arti Industries and Sudarshan in some of its products. But in most of the products, the company doesn’t have much competition. Chemcon is a leading company in HMDC, CMIC and Oil Well Completion in India also.

If we talk about Long term debt, then the company is not under many debts. Currently, the company has a debt of around 15 crores. If we compare this debt from the company’s last year profit, then this debt is very low. Company’s profit margin is also very good, its around 15%. In terms of chemical Industry, this is a good margin.

Negative and positive aspects of the company:

In India’s entire chemical market,  22% market share is of speciality chemicals, and the product category in which Chemcon works, it is the leading company in that category. If in future the company has some rivals coming, even then they have a bright future growth.

Like we all are aware U.S and China are currently witnessing a trade war, where both the companies want to have less import from each other. This could be a very big opportunity for companies like chemcon, where they can export their products to U.S. India and China are having a dispute right now. In this situation, if the government puts some restrictions in the import, then surely chemcon can take advantage out of that.

Chemcon imports most of its raw materials from China. So in this case, if India and China’s dispute gets bigger, then Chemcon will surely have to face some repercussions. This will directly affect their manufacturing and then they will not be able to supply to their customers. This will also become a hurdle in the rising demand.

After this Covid-19 pandemic and china’s unfair behaviour with India, a lot of countries have started manufacturing chemical products, where a lot of companies are from India. The company’s next negative asset is its management. The Goyal family has got a good stake in the company. SEBI had already taken action, Meenak Agarwal and Goyal, as they were found in some insider trading.

Naresh Vijay Kumar Goyal is also accused in some corruption charges. He was also sentenced by CBI in the year 2018. He challenged this order in the High Court. Later, this order was put on hold, and currently, this case is running in the High court. These cases leave a bad image of the company in terms of Corporate Governance.

You should check the subscription activity for about 2-3 days if you are going for some IPO.
Happy Investing!