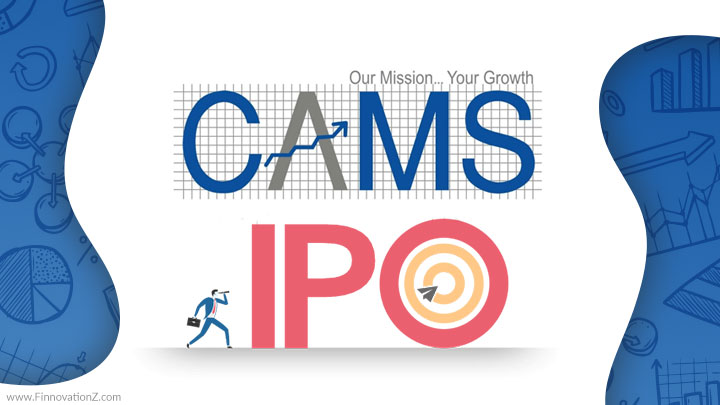 2020 is seen as the year of various IPOs. With the IPO of Happiest Minds, and Route Mobile went, Just like that, we have another IPO coming round the corner which is the CAMS IPO. The Chennai based headquartered, CAMS stands for Computer Age Management Services. Whenever an IPO comes, people have many questions, for instance, what is CAMS IPO? When CAMS IPO will open? Or How to apply for CAMS IPO?.

Well, questions are many, and such questions will be resolved in this CAMS IPO Review.

OFS or Offer for Sale is the money raised which doesn’t go to the company. This money goes to the company’s existing promoters, shareholders who are selling off their shares through an offer for sale to the public. So, in the case of CAMS, there is no focus on the IPO but only on the Offer for sale, which states that the entire money raised from this IPO will go to the shareholders or promoters who are selling their shares through this OFS. NSE, which is the National Stock Exchange, it’s a subsidiary company called the NSE investment which is selling of their shares through this OFS. So whatever amount of money is raised from this issue will go to the NSE investment.

Generally, the companies shares are listed on both the NSE and BSE, but CAMS will be only listed on the BSE or the Bombay Stock exchange. The reason behind this is that since the subsidiary company of NSE, the NSE Investment is selling their stake here, so to avoid the conflict of interest, the shares will be listed only on the BSE. 35% of the entire issue quota is reserved for the Retail Individual Investors.

Know More about the Company:-

CAMS or Computer Age Management Services Private Limited started in 1988. There are various business segments of the company like Insurance Repository, Alternative Investment Fund, KYC Registration Agency, Software Solutions and lastly mutual fund services which is the Registrar and Transfer Agent. When we talk about the business of its Alternative Investment Fund, here the company has 77 clients.

In the case of KYC Registration Business, here, Karvy has got the License of KRA from SEBI (Securities Exchange Board of India), and in here the main work of the company is to maintain the KYC records of the Investors so that the investors don’t need to do KYC every time.

In the case of Insurance Repository, the company has 39% of the market share. But the main source of CAMS revenue comes from its mutual fund services business which is from the Registrar and Transfer Agent. In the last financial year, 86.9% revenue of the company has come only from One segment that is from the mutual fund services business. Companies which run mutual funds are called the Asset Management Companies or AMC. CAMS for mutual fund companies like for AMC’s works as a registrar and transfer agent. It records the data of the investors for that particular AMC.

For example, if you are investing in a particular scheme of  HDFC Mutual fund, then all the data of your transaction will be secured under CAMS, as CAMS is the registrar and Transfer agent of HDFC Mutual Fund  AMC. This way the operations of the mutual fund company comes at ease. The fee which the registrar and transfer agent is charging for its services is charged directly from the mutual fund companies. The structure of fees which CAMS charge is on the basis of the amount invested by the investor in that Mutual fund.

The Registrar and Transfer Agents charge around 0.06% on the investments done on the equity mutual fund, and on debt mutual fund they charge 0.02%.  If the mutual fund industry goes up at rocket speed, then the major benefit will be of the registrar and transfer agents.

Growth of the Mutual Fund Industry In India:

In India, the household saving rate is quite high and it stands around 30%. This rate is even higher than the rate in the U.S and the United Kingdom. In India, people are only investing 1.2% of their total household savings in the mutual fund industry, which is severely low as compared to the other countries. The mutual fund industry of India is a 370 billion dollar industry. By evaluating the investment of Indian Companies and Indian people in mutual funds, the total amount stands for 27,78,150 crores.

When we compare this amount with India’s GDP then it stands for only around 14%. In comparison to the U.S and Australia, over there the mutual fund investment amount is more than their GDP. And if we talk of the developing countries like Brazil, then also 63% of their GDP is invested in the mutual fund. This shows that when it comes to mutual funds awareness, India is lacking a lot.

Currently, in India there are 3 Registrar and Transfer Agents:

In the year 2015, CAMS share was 61%, which slowly increased to 69% currently. This states that in this segment CAMS is the market leader. Its main competitor is KFintech Technologies, who earlier was known as the Karvy Fintech Private Limited.

One question which arises here is that why did Karvy Fintech change its name to KFintech?

Well, last year in December 2019, SEBI banned Karvy Broking which is a Stock Brokerage firm of Karvy Group, from opening new accounts. The main reason behind this was that Karvy broking transferred its customer’s shares in their accounts and then they mortgaged these shares to the bank and took a loan on that amount. They transferred a total of Rs. 1,100 crore money to their Karvy group company called Karvy Realty. When this matter was disclosed, then SEBI started taking actions on Karvy Broking, and this impacted drastically on the name Karvy. This is the reason many companies under the Karvy group started changing their names. So, because of this issue, CAMS is getting additionally benefitted.

The best thing about knowing the financials of CAMs is that it is Debt Free. CAMS Revenue in the Financial year 2017 was Rs. 502 crores which increased in the last 3 years to Rs. 721 crore in FY2020, which increased annually 9.45%.

When we talk about the Profit then in the Financial year 2017 it was Rs. 124 crores which increased to Rs. 173 crore in the Financial year 2020. This means that its net profit annually compounded grew by 11.07%. By looking at this we can say that CAMS growth has been sluggish. The main reason behind this is that whatever the fees the company’s segment Registrar and Transfer Agent is charging to the AMC is decreasing over the period of time. Registrar and Transfer Agents, for equity, charged AMC’s with 0.075% on an average in 2015, which decreased to 0.059% in the FY2020.

Great Terrain Investment Limited consists of 43.50% stake of CAMS which is the largest, then comes the HDFC has a 5.99% stake and HDFC bank has 3.33% stake.  Till now, NSE Investment Limited had 37.48% stake of CAMS, which through Offer for Sale they are selling. The reason for NSE investment Limited to sell its stake is because SEBI has told them to do so. In 2013, when NSE acquired the stake of NSE the didn’t take the approval from SEBI and because of that only SEBI told NSE to sell off its stake.

Starting off with the positive factor, CAMS with its Registrar and Transfer Agents business carries the largest market share of this industry, thus, it keeps on increasing. Out of the Top 5 AMCs, CAMS is working with the Top 4 AMCs for more than 10 years now. Thus, these are long term clients of CAMS.

While considering the negative factors, the company’s revenue coming from Registrar and Transfer Agent is 67% which is coming from its top 5 clients. If in near future, 1 or 2 clients goes away then it will majorly impact the company’s financial statements.

The second negative factor is the segment in which the CAMS is working faces regulatory changes, and during this, if SEBI plans to bring in new changes, that thing can also impact the business of CAMS. Apart from the Registrar and Transfer Agent business, other businesses performance is not that good. Recently, they had to close their Banking and Non-Banking services.

Thirdly, for CAMS, the biggest risk we see is the Competition. If one or two big players comes into this industry, then this might impact CAMS business. Building the setup as CAMS is quite difficult, but with due course of time, if other AMCs just like Franklin Templeton Investment who has their own Registrar and Transfer Agent for their company,  set up their own Registrar and Transfer Agent could impact the business of CAMS.

CAMS is bringing its IPO price to earnings ratio of 34. CAMS direct competitor KFintech Technologies is not listed on the stock exchange due to which we cannot compare its valuation from its competitor.  But by looking at the overall financial sector, major companies in the financial sector comprises of 30 price to earnings ratio. If CAMS would want to justify its valuation in future then they have to show more profit growth then its current profit growth.

Wait for the first two days and then by seeing the response on the 3rd day one should consider their decision. Be sure to consider all these points before making an investment decision!!