3 ANIL AMBANI COMPANIES ACCUSED OF FRAUD: What Is The Entire Story? 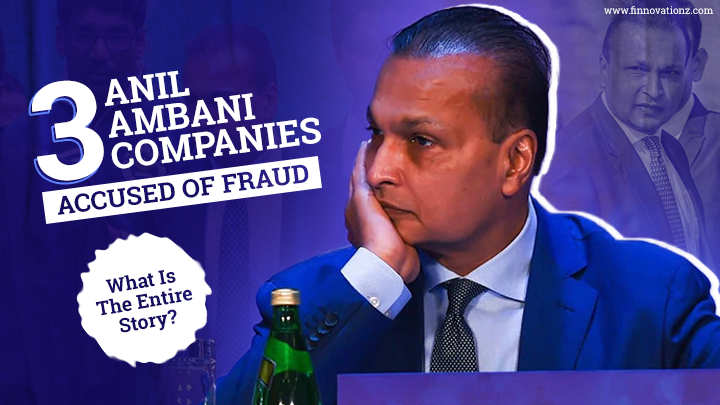 Reliance Communication’s Anil Ambani seemed to have entered into a never-ending contract with troubles!

Yet again, the younger sibling of Ambani brothers is under scrutiny. This time, the problem pondering around Anil Ambani companies is massive because if the allegations turn out to be completely justified, India will have to face one of the biggest corporate frauds in history.

The never-ending circle of defaults made by Reliance Group takes new twists every now and then. Initially, it started with the Anil Ambani Group Of Companies witnessing massive losses in every fiscal, then the entire saga of bankruptcy and finally insolvency, which is still under process. It seems to be a plot of a thriller movie!

To understand the ongoing buzz in a better way you can first read our previously written blog on the rise & fall of Anil Ambani and then proceed to read this one.

What Do The Reports Say?

The entire nation is well aware of Reliance Communications bankruptcy case and that the Anil-Ambani led company is in the middle of the resolution process. But, the twist in plot occurred after the Economic Times reported that three Indian banks including State Bank of India have classified the accounts of 3 telecom companies of  Anil Ambani Group namely- Reliance Communication, Reliance Telecom Limited and Reliance Infratel as fraudulent!

Although there is no official announcement made regarding this, the Delhi High Court has asked Union Bank Of India and Indian Overseas Bank to maintain its existing position over accounts of three companies being classified as fraudulent until next hearing on January 13.

According to the allegations made, Reliance Communications owes 47,193 crores then there are Reliance Infratel as well as Reliance Telecom that owe 12,687.65 crores and 24,306.27 crores respectively. The combined amount (86,188 crores) is 10 times more than the amount involved in the Vijay Mallay’s scam. This individual factor is what makes the entire case even more crucial as if proven right, this could be the biggest scam in India. Furthermore, the 3 banks are given legal permission to issue a show-cause notice to 3 Anil Ambani companies.

From Bankruptcy To Alleged Corporate Fraud

The fact that the Rcom is bankrupt has been lingering around for quite some time now. Sadly, this recent accusations regarding banking fraud and several tweets made by Sucheta Dalal, in this case, has shocked the nation!

The current allegation of conducting fraudulent activity has been made after a forensic audit conducted in 2019. The forensic audit was actually initiated by lenders who had given money to Reliance Communication and 2 other entities from the Reliance Group. The main purpose of the audit was to look into the diversion of loans made by the companies between April 2014 and December 2018.

Finally, it was found that there were questionable transactions made by these 3 telecom companies of Reliance Group of Companies. These transactions were worth a whopping amount of 5,500 crores. The transactions were made from May 2017 to March 2018 and during the same time period, the 3 companies were sanctioned loans by banks. This clearly indicates that after the forensic audit the banks became aware that loan money was being directed towards non-notified causes.

For those who are not aware of the fact that this is not the first time that any Anil Ambani-led firm is classified as fraud. A few months back in August, Punjab National Bank reported to the Reserve Bank of India that it has classified the account of Reliance Home Finance Limited (RHFL) as a fraud account.

As a matter of fact, PNB decided to follow the forensic audit report released in January 2020 because it clearly highlighted that some transactions made by RHFL were questionable and there was a diversion of funds as well. Apart from PNB, other banks that have lent money to RHFL include - Axis Bank, Bank of India, Bank of Maharashtra, Canara Bank, Federal Bank and State Bank Of India.

But, it was only PNB among other banks which decided to tag the RHFL’s account as a fraud back in the month of August 2020.

Who Is To Blame?

In technical terms, a banking fraud in simple words is wilful misconduct of funds or loan taken for banks. The party alleged the fraudulent act often misrepresented information to the bankers. The loan money is either used either for personal causes by the management or for causes other than mentioned to the banks.

If you are aware of what led to the downfall of Anil Ambani then you must know that telecom companies owned by him were performing poorly and their financials were deteriorating as the years passed. The question that arises here is that despite knowing that the telecom companies coming to the Reliance Group were loss-making entities then why would banks even sanction them loans of such big amounts? For instance, in FY 2017-18 Reliance Communications reported a loss of nearly 3000 crores but in the next fiscal the banks provided them with the loan in crores ignoring the fact that the firm has been booking losses for quite some time.

The banks are said to have discovered last year only that the loan taken by the 3 companies have not been used for the purpose they were taken. Still, they kept their mouth shut but for whose interest? As a result, some experts have even commented about banks being partially responsible for the mess they are in!

Be it, Nirav Modi’s scam, Vijay Mallaya’s case Indian economic system has cheated with a number of corporate frauds over the years. The crores of money that go away into these bank frauds are often the hard-earned money of the general public.

In this case, the banks were aware that the companies asking for a loan are loss-making firms and yet they turned a blind eye and sanctioned massive loan amounts. So, I would leave you, readers, with a question!

Who you think is to be blamed here? Decide yourself.